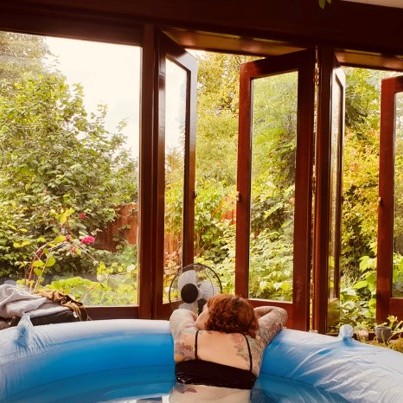 This is a magical birth story.  First time Mum, home birth.  Each time I read it I get emotional at the part where Esme’s amazing midwives arrived.  I love how calm Esme remained when she went into the Birth Centre and how this helped her consider her options and trust going back home for the birth she had planned for.  Beautiful story and one of the most amazing photos I’ve seen – relaxing with nature!

So, I woke up at 3am on July 18th in a little bit of pain, I was sure this wouldn’t be the real thing, and even if it was, there’d be a long road ahead. I told myself not to get excited, got up and went to the bathroom and tried to go back to sleep. Sleep didn’t happen, these sensations (I hadn’t allowed myself to believe they were actual surges just yet!) were coming fairly often. I put my affirmations on and paced the upstairs until Jack woke up around 6am.

I told him ‘I think the baby’s coming..’ His face lit up. I umm’d and ah’d about whether I should call the midwife or not, decided to do so as they’d previously said ‘just let us know when things start, just so we know’. My midwifes phone (Maiken-she sadly wasn’t on shift) diverted me to another homebirth midwife, whose phone diverted me to the labour ward and the community midwives. I was told the on shift team were at another labour and so there was nobody to come out to me, to keep monitoring the surges and to call back when they were 3 in 10 minutes, when hopefully the midwives would be available. I was of course warned about this scenario arising, yet never entertained the idea it would actually happen to me! However, I didn’t feel panicked in any way, I was calm.

I was using a tens machine by now, and still listening to my affirmations, a couple of hours later, the surges were consistently 3 in 10 and increasing in intensity. I called back, typically nothing had changed regarding the staffing situation. The midwife on the phone asked me if I was willing to come in to be examined, to figure out the best plan. I decided to go for this, because one of the trickiest things for me was not being able to judge how quickly things were or could progress.

We went in (not a comfortable car journey!), both the midwife who greeted us and the one who examined me were lovely, they both spoke in ‘hypnobirthing terms’ even though I hadn’t mentioned anything about it. I was 4cm, so in established labour.  The lovely midwife advised me to go home, get in the pool and try to manage for as long as I could, and then hopefully the next shift of midwives would come and join me. The shift change was at 4:30pm, and it was currently 9:30am! It was slightly daunting, yet I really felt calm still. The birth centre was full, so the other option would be to go straight to labour ward, so far from my homebirth dream!

We headed home. Jack got the pool up, started filling it and lit the lavender candles. My surges were ramping up, when my phone rang. ‘Hello Esme, my names Becky, I’m one of the homebirth midwives. I’ve just received an SOS. It’s my day off but I’m on my way over to you.. Maiken is off too, but will be joining us in an hour’. I could not believe it! I felt pretty emotional at this point, how lucky?! (I still feel SO grateful!)

Becky arrived, shortly after I got into the pool, instant relief by the hot water (everyone should have a water birth!) Looking back I had completely lost all sense of time, the surges were intense and very regular, but that was all I was aware of. I had a mixture of the affirmations and the ‘relax with nature’ mp3 playing, a flannel with lavender oil, and I was in the pool facing out to my glorious garden for pretty much the whole afternoon. The midwives were quiet and very much in the background, monitoring me as and when they had too, I hardly noticed. Jack said I had my eyes closed, and my face relaxed all day, other than when the surges came.

The midwives didn’t intervene with anything, but when I couldn’t do a wee (it had been about 9hours..) asked me if I would be willing for them to pop a catheter in, in case my bladder was getting in the way, I agreed and they also examined me. I was 9.5cm! Hooray!

I went back in the pool, I was very much adamant I couldn’t do it at this point! I said afterwards that it felt like the transition zone lasted for ages, but Jack said it really didn’t. Between the midwives and Jack, I was reassured, massaged, and told how brilliantly I was doing.  Maiken kept saying my waters would go any minute and the pressure would ease, but they never did, and Cassius was born in his waters at 5:34pm (only an hour after shift change!), on his original due date. The sun came out and shone in on us, it was so beautiful!

I absolutely could not believe I’d done it. The instant elation was a feeling I’m pretty sure doesn’t compare to anything else in the world? I picked him up out of the water and we had skin to skin until the cord went white and was cut and tied. I got out and delivered the placenta naturally while Jack had some skin to skin. The midwives checked me over and weighed Cassius (7lb1 of loveliness) and left us to it.

I still can’t believe how everything aligned that day for us. If the ladies on shift hadn’t been at another birth, I wouldn’t have ended up having my original midwife (who I had bonded with) deliver Cassius. If the birth centre was free when we went in, I’m pretty sure I would have decided to stay. I’d written in my preferences that I’d ask for pain relief if I wanted, but to not be offered it. There were many surges where I think I hoped someone would offer it to me! But of course the wonderful midwives never did, and for some reason I never asked, so I birthed him with no pain relief. I was and still am in complete and utter awe at myself and what my body has accomplished! It’s so amazing, and I feel so incredibly grateful thinking of how things ended up happening for me- I’ll never forget what Maiken and Becky did, my birth could have been SO different and far from what I hoped for.