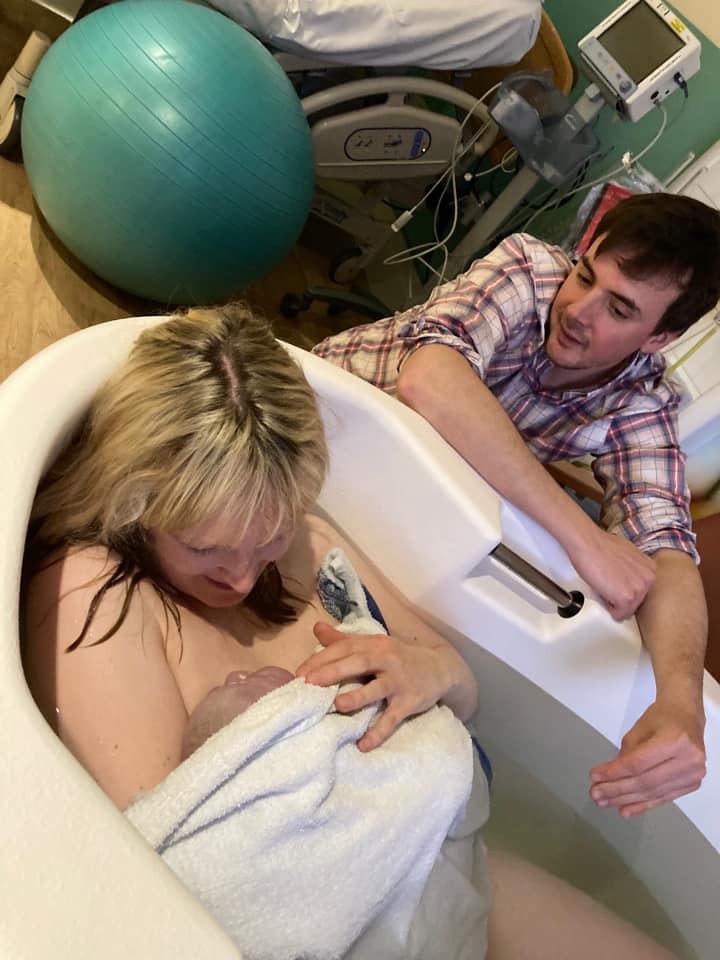 “I have had the honour of sharing all the CALM Birth Knowhow with Beckie both times we has been preparing for birth.  Her first birth with her daughter was really smooth and pretty quick, arriving at the birth centre being 9cm.  The birth of her second baby was very similar, 10 hours from first sensations to birth!  I love how calm and connected to all that was going on within her body Beckie was.“

11am – After a relaxing morning having a long bath with my mp3s on, I was watching tv on the sofa when I noticed some cramps (like mild period cramps) which came on intermittently. I didn’t think much of it as I’ve been getting quite a few Braxton Hicks.

2pm – I lay down on the bed and began timing the sensations using one of the apps, finding in the next couple of hours that they were around 20 minutes apart, although some were as far apart as 35.

6pm – Things escalated quickly and by the time Nick and Sienna got home my sensations were suddenly every few minutes apart. Sienna was being so sweet holding my hand on the bed. Nick called his Mum to drive over straight away and took Sienna to a neighbour whilst I called the birth centre and Ellie, the student midwife who would be delivering the baby.

7pm – On the way to the hospital I was feeling the natural urge to push every time I had a sensation. We arrived at 7.20. Ellie had already got there and was filling up the birth pool. The lights were dim and I noticed we were in the same room that I gave birth to Sienna in.

I kneeled on the floor leaning against the bed, taking deep breaths of gas and air whenever a surge came on. The urge to push was really strong now.

When the birth pool was ready I submerged myself in the water and immediately felt some relief. I was kneeling over the edge of the pool towards Nick who was giving me words of encouragement, providing me with gas and air and also stroking my arms.

2 midwifes were behind me, encouraging me to go with what my body is telling me to do. I continued to take deep breaths – quick inhales and slow exhales to help move my baby down.

The baby stayed like that for a couple of minutes and it was a strange sensation as I could feel them moving their head around. Eventually baby turned 90 degrees to the right and I was able to push the rest of baby out.

The midwifes moved the baby up through the water and I could see their face rising before Nick picked them up and put them in my arms.

We both had a look in between baby’s legs – a little boy!!!

I then sat in the water for a while wrapped in towels with baby on my chest with him mostly submerged into the water to keep warm.

After a while we got out of the water to lie on the bed. The cord was still pumping away at this point and we lay there for a while before the placenta was delivered naturally and Nick cut the cord.

Thank you Lisa for the 2 beautiful birth experiences I have had, which are down to the relaxation techniques you have taught me and the empowerment you have given me. The understanding of medical interventions and the ability to question other people’s opinions has been invaluable.